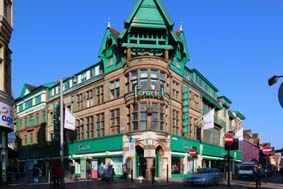 When Fenwick’s announced the closure of their Leicester store earlier this year, many of us in the Leicester Group of the Victorian Society assumed that the building was already protected by listing. When we realised that this was not the case, we set about researching the history of the building and submitted an application.

Older Leicester residents may still remember the store as Joseph Johnson’s, a Leicester firm founded in 1880. Their original shop was a five bay building designed for them by Isaac Barradale at 36 Market Street (which remained the postal address of the store right up to closure). This building, in Barradale’s domestic revival style, has elaborately detailed fenestration with delicate glazing bar patterns and an unusually corbelled and pedimented top floor enlivened with a textured white render. (It can be seen at the extreme left of the picture above.)

Barradale was also responsible for Gresham Buildings, the impressive block which turns the corner into Belvoir Street. This was commissioned by Richard Allen in 1883 - the date and Allen’s initials are displayed in cartouches just below cornice level. Allen clearly wanted to make a bold statement, and the group of flamboyant gabled dormers together with the curved two-storey oriel window and polished marble column supporting the polychrome canopy of the entrance lobby make a splendid contribution to the street scene at this prominent corner.

The nature of Allen’s business is unclear, although the canopied gothic statue niche above the entrance perhaps hints at some ecclesiastical connection. His confidence may, however, have been misplaced as Gresham Buildings was absorbed into Joseph Johnson’s store by about 1900.

It is these two original buildings, together with a short linking section in buff brick, which Historic England has listed with a Grade II designation. Joseph Johnson’s continued to expand, subsequently incorporating a former hosiery factory on the corner of Belvoir Street and Bowling Green Street, and commissioning a link in the ‘moderne’ style to replace an assortment of smaller properties between Gresham Buildings and the hosiery factory. This was designed by the Leicester practice of Fosbrooke and Bedingfield in 1926.

In 1962 Joseph Johnson’s business was acquired by Fenwick’s of Newcastle, and this prompted a further wave of expansion. The former Bennett’s Toy Shop on Market Street, built in 1898 adjoining Johnson’s store to the left, was incorporated, as was an additional building with a bay windowed facade on Bowling Green Street, consolidating the ownership of a large rectangular block. A new infill section was built on Bowling Green Street to provide vehicular access to an internal loading bay.

Our application had to cover the entire block, but Historic England sensibly considered the individual elements separately. We are delighted that the two original buildings on Market Street have been listed as these are undoubtedly the most important sections of the complex. We tried to make a case for the former hosiery factory, and the ‘moderne’ link on Belvoir Street (even though it is outside our period), but our arguments were not accepted by HE’s designation team.

Find out what’s happening in your area: