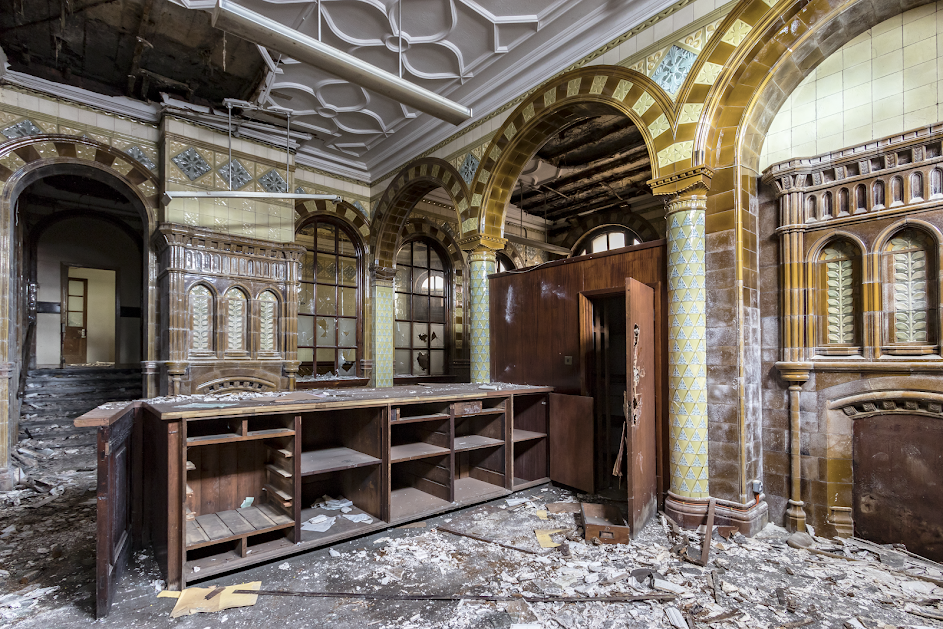 This fine building is one of a series of offices designed by one of the Victorian period’s greatest architects Alfred Waterhouse. Waterhouse’s other buildings include the Natural History Museum and Manchester Town Hall. The Prudential Assurance Company was wildly successful in the second half of the 19th Century and it commissioned offices for many of Britain’s newly wealthy industrial cities. While varied in style, almost all are built in red brick and terracotta. Many of these prestigious buildings have been sensitively altered and reused, but the example in Oldham remains empty, un-maintained and deteriorating. Yet this hides a stunning lavishly tiled interior designed to impress potential customers – and still effective today. Union Street was transformed in 2014 when a Metrolink tram stop opened right in front of the Prudential. Yet the deplorable state of this landmark building is extremely uninviting. A sensitive conservation-led regeneration scheme is long overdue.

Griff said:‘Oldham is a town with a rich heritage and huge potential for regeneration, potential which the Council has really begun to engage with. The ‘Pru’ is such a prominent building that a scheme to return it to use could kick-start heritage-based regeneration in Oldham Town Centre. We strongly urge the local authority to put pressure on the owner to pursue a scheme of reuse, and if necessary to consider enforcement action or compulsory purchase.’