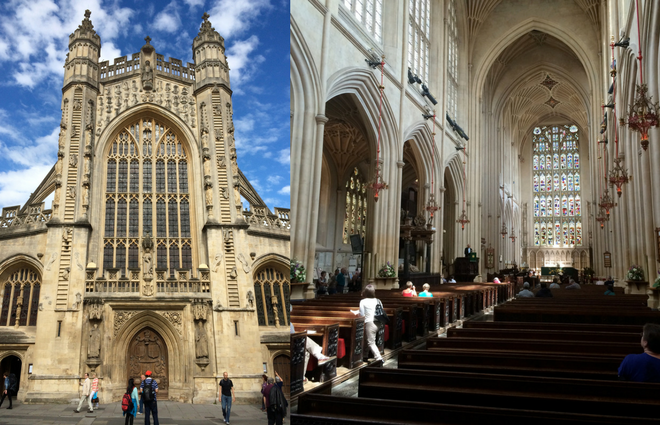 As part of its Footprint scheme, bolstered by £12.1 million of Heritage Lottery funding, Bath Abbey proposes removing all fixed furniture to stabilise the collapsing floor of the Abbey and install underfloor heating. Whilst the intention is to reinstate some of the furnishings, they mean to permanently remove the Victorian pews from the nave and aisles.

These pews were designed by renowned Victorian architect George Gilbert Scott, the architect responsible for St Pancras Station and the Albert Memorial. The Victorian Society strongly believes that permanently removing the pews is unnecessary and would be detrimental to the significance of the building.

This conflict of opinions has resulted in the Victorian Society becoming party opponents at a Consistory Court Hearing taking place on Wednesday 4th and Thursday 5th October within Bath Abbey itself.

Bath Abbey is a Grade I-listed building, an acknowledgement of its exceptional historic and architectural significance. Unlike listed secular buildings, Church of England places of worship are exempt from the requirement to obtain listed building consent from local councils to undertake internal or external changes which would normally warrant such consent. Instead, party opponents will be presenting their cases to the Chancellor of the Diocese of Bath and Wells who will then make a judgement, expected in the coming months.

Whilst Bath Abbey argues that the permanent removal of the pews would make the Abbey more accessible and flexible, the Victorian Society believes this could quite easily be achieved by removing the pews from the aisles or with greater use of the transepts which are already empty, and that the historic and architectural importance of the Gilbert Scott pews demands their reinstatement to the nave.

Bath Abbey retains an almost complete set of Scott furnishings. In most other medieval churches or cathedrals of a similar size Scott worked on only the chancel furniture is left. The nave pews are unique to the Abbey and are excellent examples of Scott’s work, partly modelled on those in other 16th century Somerset churches.

Christopher Costelloe, Director of the Victorian Society, says: “The small benefits of removing these historic pews - benefits which could be achieved in other, less destructive ways – in no way justifies the substantial harm it would cause to this listed building. Removing the nave pews would not only break up Gilbert Scott’s complete restoration, it would also expose the ancient ledger stones beneath, which are currently protected by the pews from damage inflicted by the Abbey’s heavy flow of visitors.”

As part of our campaign, we launched an online petition that has since garnered the support of over 1,500 signatures. One such supporter is Daily Mail columnist and author Bel Mooney, who writes: “Removal of these beautiful pews would be an act of vandalism – very costly and with no aesthetic or practical justification… How ironic that Heritage Lottery funding should be earmarked to destroy a part of our heritage.” If you have not yet added your name to the petition, and believe as we do that the pews should be retained, please sign today.