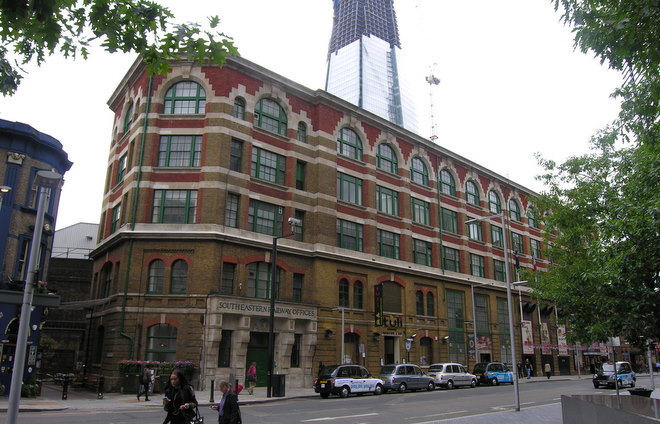 It's been described as London's Flat-iron building because of its distinctive tapered end, but the former South Eastern Railway Office on Tooley Street is now threatened with demolition in a major redevelopment of London Bridge Station. As part of the plans this distinctive polychrome building would be replaced by a public plaza.

The terminus needs to be rebuilt to accommodate more platforms and the listed train shed of 1865, designed by the notable railway architect Charles Henry Driver, will be dismantled and removed. It is the only surviving overall roof of its type in London and its demolition will be a major loss, making it all the more important that other heritage assets are retained.

The South Eastern Railway office is in a Conservation Area but was recently turned down for listing. The Victorian Society is now appealing that decision after unearthing evidence that 64-84 Tooley Street was designed by Charles Barry Junior, and is his only surviving commercial building.

'Many of the buildings on the Top Ten have suffered years of neglect but the South Eastern Railway office is still in use and in good condition. There is also no operational need for this destruction', said Dr Ian Dungavell, Director of the Victorian Society. 'To knock this attractive historic building down to create a wider pavement is unnecessary and wasteful.'