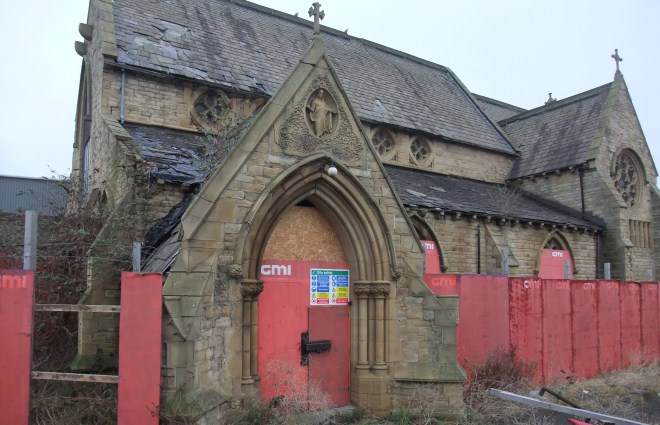 National architecture charity the Victorian Society has included St Andrew's Church in Huddersfield on its 2017 Top 10 Endangered Buildings list. The Top 10 campaign, now in its tenth year, recognises the plight of endangered Victorian and Edwardian buildings in England and Wales in the hope that increased publicity will help save them.

St Andrew's (Grade II, 1870, W. H. Crossland) is the only church on this year's Top 10 List and its situation as a historic building has become critical. This once grand Crossland church makes for a sad sight as it is surrounded by new developments on the site of an A-road approaching the centre of Huddersfield. Several tiles are missing from the vegetation-strewn roof, and it is surrounded by red wooden fencing, presumably to match the large Costa Coffee advertisement emblazoned at the foot of its east-facing window.

The redundant church is up for sale for a new commercial use, but as it continues to stay empty and derelict it is becoming increasingly vulnerable to damage from vandals, nesting birds and general decay. The church was abandoned with all its interiors intact - including font, pews and even organ - but over the years many of the stained glass windows have been smashed and a thick layer of decay now covers the interiors.

Christopher Costelloe, Victorian Society Director, said: "Such a fine Crossland church deserves so much better than what has befallen it, left forgotten at the edge of a retail park. We are still hopeful for a sensitive regeneration but time is rapidly running out to save its 19th century character and detail from being lost forever."