The Victorian Society urge Bradford Council to save the remains of a historic piece of Victorian architecture currently facing demolition. 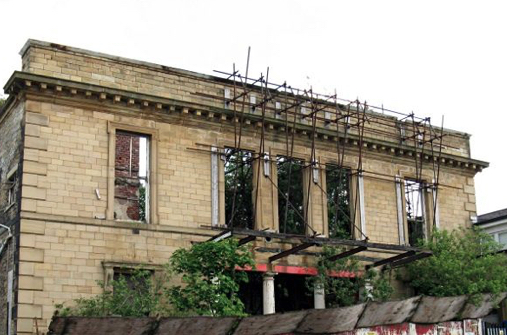 The Victorian Society has voiced its strong objection to plans to demolish the Grade II-listed Fountain Hall in Bradford and replace it with a 5 and 6 storey development, stating that the structure can be repurposed as part of a creative development, rather than demolished.

Since being badly damaged by fire, the building has been allowed to fall into a state of disrepair. However, the Victorian Society outlines that the building is perfectly fit for repurpose, and could easily be incorporated into an imaginative conversion scheme.

The building was listed on the grounds of its exterior architectural quality, and although its roofs and interiors have been lost, the building retains its external walls, including its principal façade, relatively intact. Despite its state of disrepair, the architectural qualities of the building and the contribution it makes to the City Centre Conservation Area can still be readily appreciated. The demolition of Fountain Hall would therefore clearly result in harm to the significance of the conservation area.

Tom Taylor, Conservation Adviser for The Victorian Society states, ‘the Heritage Statement provided with the application makes absolutely no attempt to describe the significance of the building; and claims that ‘the special interest of the building has been substantially eroded.’ Although the building’s interiors have clearly been lost, the principal interest of Fountain Hall springs from the architecture of its surviving façades, which retain aesthetic value, make a positive contribution to the significance of the Conservation Area, and represent a formative period in Bradford’s historical development.’

Fountain Hall remains a designated heritage asset in its own right, and the applicant has neither shown that it lacks significance, nor given any justification for the substantial harm that will result from its demolition. The Victorian Society urges Bradford Council to refuse this scheme in order to save this historic part of Bradford’s heritage.