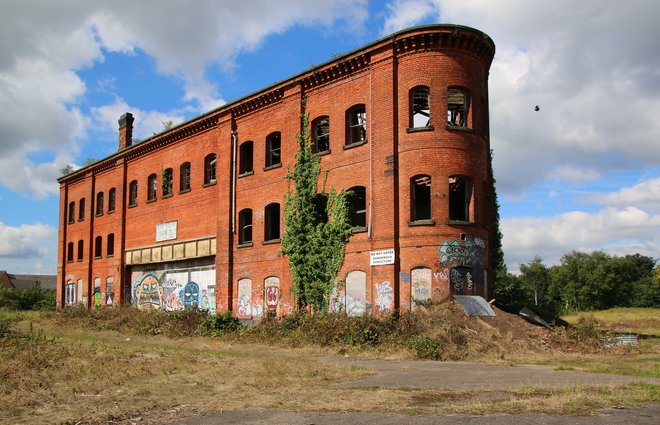 All of the buildings on this year's list have been neglected for up to fifty years and have now reached a critical point of dereliction: only urgent action to repair and renovate the buildings can save them from being lost forever.

The 2017 list includes two Victorian cemetery chapels designed by Alfred Waterhouse, the architect behind London's Natural History Museum; a former glassworks in the Midlands which produced glass for the clock faces of Big Ben; an Edwardian seaside pavilion which enjoyed life as a tearoom, theatre and snooker club before being shut up and abandoned; and a huge former railway warehouse left derelict for almost fifty years.

Griff Rhys Jones, Victorian Society Vice President, said: "The Victorian Society's Top 10 Endangered Buildings campaign is now in its tenth year and over the years we have seen what a difference it can make to the future of Victorian and Edwardian buildings in peril. All of the buildings on this year's list have local, even national, importance in terms of their history and/or architecture. To have let them fall into their current state is deplorable, but there is still time to save them for future generations to enjoy.

"Many of the buildings have committed community groups rallying behind them, but I know from experience that funding can be difficult to secure. We need local authorities and private investors to recognise the potential of these buildings and take steps to secure and revitalise them before it's too late."

Victorian Society Director, Christopher Costelloe, said: "We're very proud of the continued success of the Top 10 list over the last decade. Out of the 100 buildings that have appeared on the list since 2007, only four have been completely demolished and over a quarter have been saved by being sensitively redeveloped and are now thriving back in the community. Many others are on their way towards salvation with dedicated community groups banding together to raise money and awareness to keep the buildings they love safe from insensitive redevelopment or dereliction."

• The Great Northern Railway Warehouse, Derby (Grade II, 1877-8, Kirk & Randall of Sleaford) This large railway warehouse bordering a roundabout on the outskirts of Derby has been left derelict for almost 50 years. It was built in 1877 by Kirk and Randall as part of the Great Northern Railway at Friargate Station. Planning permission was granted for the site to be redeveloped into a large-scale shopping and accommodation complex in 2011, with the warehouse functioning as a new supermarket, but due to economic downturn these plans have stalled. This grand building is the frequent target of arson attacks and is at the tipping point of salvation, with emergency action needed to secure it for the future. Pictures are here.

• Fison's Fertiliser Factory, Bramford, Suffolk (Grade II, 1858-60, architect unknown) Originally built as a fertiliser factory in the mid 19th century, the buildings known as the North Warehouse are the only structures remaining on the site of one of the major British brands of the Victorian era. Since the site closed in 2003, redevelopment plans have been approved but no progression has been made and the building, which still maintains many of its original features, is continuing to deteriorate. Urgent work is needed in the short-term to secure this building, which has been the victim of at least three fires in the last two years, while a long-term redevelopment plan is sought. Pictures are here.

• The New Tiger's Head, London (unlisted, 1890s, architect unknown) Comparatively little is known about this 19th century former pub on the borders of Greenwich and Lewisham. It faces its brother, the Old Tiger's Head, on the other side of the road, which unlike its later incarnation is still a thriving watering hole. Having been left empty and deteriorating for a number of years, it is currently on sale for a hefty £2.5 million; meanwhile the council have contacted the private owner to request emergency repairs. But a sensitive new use, either commercial or residential, is the only long-term solution to regenerate this fine building. Pictures are here.

• Chapels at Ince-in-Makerfield, near Wigan (Grade II & Grade II, 1855, Alfred Waterhouse) In 1855, Alfred Waterhouse, architect of the Natural History Museum, won a competition for a commission to design two chapels for the cemetery at Ince-in-Makerfield, a small town near Wigan. Despite being listed in the late 1980's, these fine chapels have been left empty and without a use for many years now, and are steeply falling into disrepair. The council are currently looking at costing some temporary, short-term repair works, but the long term future for these two beautiful chapels remains decidedly bleak. Pictures are here.

• Cannington Shaw no.7 Bottle Shop, St Helens, Merseyside (Grade II, 1886, architect unknown) The Bottle Shop is all that now remains of what was once claimed to be the largest bottle making factory in the country. The abandoned building has gradually been surrounded by a new development and now lies forgotten in the middle of a Tesco carpark. Its plight has been featured on regional television and in the local press, and English Heritage have highlighted its international importance in the field of glass-making, and yet it continues to deteriorate with its survival as an important heritage asset in doubt. Pictures are here.

• The Leas Pavilion, Folkestone, Kent (Grade II, 1902 and 1928, Reginald Pope) Originally built as an Edwardian tearoom on the coast of Folkestone in Kent, the Leas Pavilion has enjoyed a colourful history as a successful theatre and then snooker club. Sadly, in 2007 it closed its doors and has remained empty and neglected ever since. Planning permission for an apartment block that would be built over the top of the Pavilion, which was built below ground level, was granted in 2015 but no work has started other than some urgent works for the building's immediate safety. An active local group continues to campaign for its survival, but its situation as a building at risk remains critical. Pictures are here.

• Buckley's Brewery Maltings, Llanelli, Wales (Grade II, 1852-6, Rev James Buckley) These maltings once formed part of the 19th century development and expansion of Buckley's Brewery, one of the first breweries in the world to produced canned beer. They have been left empty and without a use since the brewery closed and moved to Cardiff in 1998, and those two decades of neglect show in the poor state of the building. A planning application of conversion to residential apartments was approved in 2014 but no progress has been made, and further delay is a luxury these endangered buildings can no longer afford. Pictures are here.

• Chance's Glassworks, Smethwick, West Midlands (Grade II, 1824, The Chance Brothers) Chance's Glassworks is arguably one of the most important industrial sites in the West Midlands. The clock faces of Big Ben and other glass in the Palace of Westminster were produced here, as well as some 2300 Victorian lighthouse lanterns used around the world. Despite this strong international history the buildings have been left to deteriorate to a shocking degree; the site is currently held by a skip hire company, a totally unsuitable operation for such a historically important site. A more sensitive approach must be urgently adopted to preserve the significant heritage of this scheduled ancient monument with its collection of listed buildings. Pictures are here.

• Feversham Street First School, Bradford, West Yorkshire (Grade II*, 1873, Lockwood and Mawson) Since closing as a school in 1993, this striking Gothic Revival building in Bradford was used mainly for commercial purposes but now appears to be closed and abandoned. Despite its obvious potential, there have been no substantial planning applications within the last two decades. Surely a new, permanent use for this building - the only Grade II* on this year's list - could be quite easily found? Pictures are here.

• St Andrew's Church, Huddersfield (Grade II, 1870, W. H. Crossland) The only church on this year's list, St Andrew's makes a rather sad sight as it is surrounded by new developments on the site of an A-road approaching the centre of Huddersfield. It is up for sale for a new commercial use, but as it continues to stay empty and derelict it is becoming increasingly vulnerable to damage from vandals, nesting birds and general decay. Such a fine Crossland church deserves a sensitive regeneration - rather than its current use as a Costa Coffee billboard - but time is rapidly running out to save its 19th century character and detail from being lost forever. Pictures are here.

The Society has published an updated campaigning guide http://www.victoriansociety.org.uk/about/campaigning-guide/ to encourage people to fight for the buildings they are concerned about which have not made the Top Ten list.

Update on last year's 2016 Top Ten list which can be viewed here:

There have been positive developments for some of 2016’s Top Ten. Earlier this year, we welcomed the news that North East Lincolnshire Council had purchased Victoria Mills for £1 bringing the building into public ownership. Once current works are completed it is not yet known what the building will be used for, thought it could "improve the borough's maritime heritage offer", the council have said. Works are underway at Red Barns in Redcar, former home of Gertrude Bell, to separate the property into dwellings as the planning permission. Some restorative works have been done to the roof to prevent further damage. The RBPT are continuing to work with the owners and the Local Authority to secure the future of this important building.

The Stafford Old Library Trust are fighting for acquisition of the Grade II-listed building. Earlier this year an offer of £400,000 was sadly rejected by the owner. The sale notice has since been withdrawn, so the hope is the Carnegie Library (as it is also known) will re-emerge for sale at a much more reasonable price so the trust can raise the money for purchase to keep it as a community space. The long-term fate of Rylands Mill still hangs in the balance as we understand a buyer is yet to be found, though the asking price has dropped considerably from £2.5 million to £700,000. Discussions with the owner remain confidential, though planning or listed building consent has yet to be granted. In the meantime, the council are trying to ensure the site is secure by utilising statutory powers.