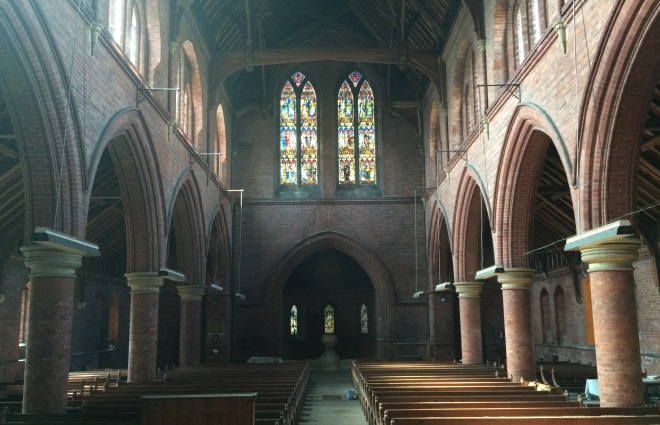 This tall red brick church, in a vigorous Early English gothic style, is beautifully proportioned and largely intact. Described in its listing as an outstanding example of a large, red-brick town church, it is one of the best works by Blomfield, one of the 19th century's most active and successful church architects.

Sadly, despite being watched over by a dedicated member of the former congregation, a lack of repair since the church closed in 2008 means that daylight can now be seen through the roof above the altar. As a result, the magnificent Powell & Sons inlaid stone decoration on the wall behind the altar has been damaged by damp. The projected cost of repairs over the next 10-15 years is £1.2 million, but this reflects a backlog of basic maintenance rather than any fundamental structural problem affecting the building.

The Church has been up for sale since January 2012 but there have been no sustained expressions of interest. As a result, the Church Commissioners are now mooting demolishing the church. Demolishing a Grade II*-listed building without fundamental structural issues is extremely unusual and would set an unfortunate precedent.

The Church Commissioners should work proactively with local groups and the council to find a new use for this important building.

Other buildings nominated for inclusion in the Top Ten in Sussex included the Carmelite Convent in Hunston, empty since 2007 and damaged by fire in 2009,and the Brighton Hippodrome whose owners were recently granted permission to transform the Hippodrome into a cinema.