Striking survival from a previous age in disastrous condition 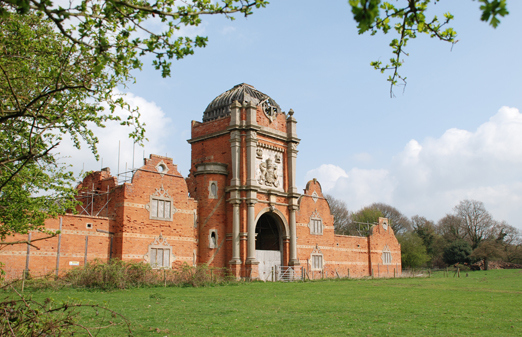 (1856, M. J. Dain, Grade II* )
Bradgate House was demolished in 1926 but its elaborate stable block still survives, albeit in a ruinous and dilapidated condition. It was built on a lavish scale (the bill is thought to have run to £30,000) for the Seventh Earl of Stamford when he was made Master of Quorn Hunt in 1856. The stables and the surrounding land are now owned by an aggregate company and the area isn't open to the public but the now roofless stable block can be seen from the nearby A50. A Royal Commission on the Historical Monuments of England survey was done in 1992 and over the years several ideas have been put forward to rescue the building, but so far nothing has proved viable. The stables are now desperately in need of help or these outstanding reminders of Leicestershire's equestrian heritage will be lost for good.