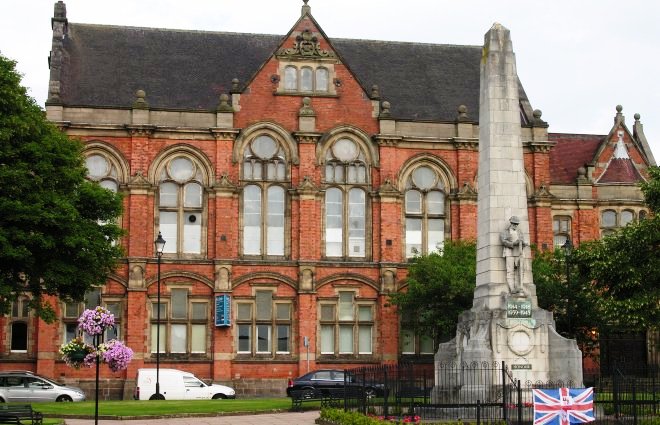 Fenton was developed by the Baker family, which built the town hall for the town.Built in 1888 it was designed by Robert George Scrivener & Son.Together with the church, square, library and war memorial it forms a charming civic complex.Later the town hall became a courthouse.

Layers of partitions, plasterboard and heating ducts have hidden, but not destroyed, the soaring proportions of the vaulted principal chamber.

The current owner, the Ministry of Justice, has put the building up for sale.Sadly, as English Heritage has decided not to list Fenton Town Hall, its interior, including the Minton tiling and First World War memorial, are unprotected.Next door the fine Edwardian library, also unlisted, has recently shut its doors.

A 'Save Fenton Town Hall' campaign has been set up to protect the memorial and proposals are afoot to turn the Town Hall into a community venue.

We urge the Ministry of Justice to work with Stoke-on-Trent City Council to find a new role for Fenton Town Hall that will ensure that its chamber and First World War memorial remain intact and accessible to the public.