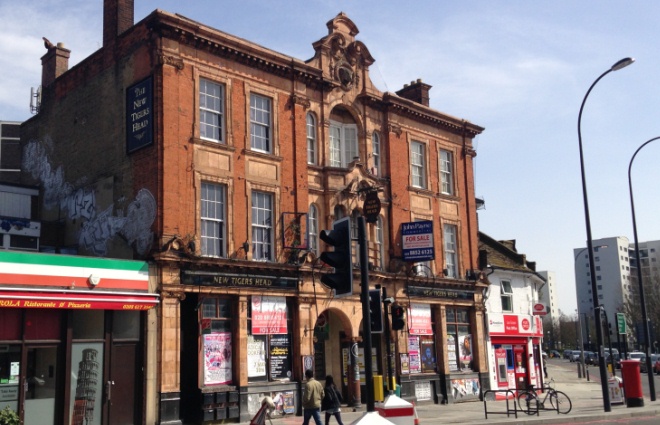 National architecture charity the Victorian Society has included The New Tiger's Head in Greenwich on its 2017 Top 10 Endangered Buildings list. The Top 10 campaign, now in its tenth year, recognises the plight of endangered Victorian and Edwardian buildings in England and Wales in the hope that increased publicity will help save them.

Comparatively little is known about the New Tiger's Head, a derelict Victorian former pub on the border between Greenwich and Lewisham. A plaque on the inside of the double-arched doorway claims it was built in the 18th century, though the use of decorative terracotta on the façade suggests that much of it was rebuilt in the later 19th century. It is currently on sale for a hefty £2.5 million, and following discussions with both Lewisham and Greenwich councils some emergency works are taking place to secure the interiors from further damage.

Christopher Costelloe, Victorian Society Director, said: "We are pleased to hear that the emergency works to secure the interiors are underway, but what this building needs sooner rather than later is a long-term plan for sensitive restoration. Whether commercial or residential, this well-situated and architecturally significant building has great potential for regeneration and we hope that inclusion in this year's Top 10 will encourage potential buyers to come forward to save it."