This tribute to Britain’s war dead has been broken up and placed in storage for over ten years, the column feared lost. We call on Sheffield Council to set out its plans for the monument in time for Remembrance Day. 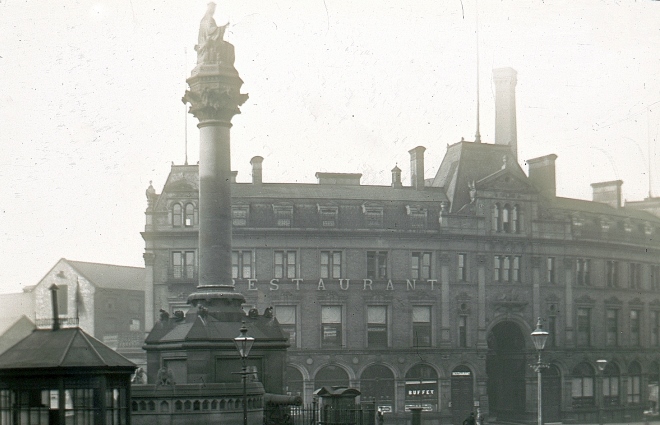 Although the First World War is often considered to be the first modern war, the same could be said of the Crimean War. It was the Crimean war which gave us both the Charge of the Light Brigade and Florence Nightingale’s hospital reforms. Monuments to Britain’s fallen in the Crimean war are relatively unusual, so it’s a shame that Sheffield Council have hidden Sheffield’s Crimean war monument away for years. As shown in pictures, the monument was originally very impressive, consisting of a tall column surmounted by a seated figure of Victory with Russian cannons at the base. In 1960 changes to the road layout meant that the monument was moved from Moorhead to Sheffield’s Botanical Gardens without the column, which was reportedly broken up and placed in a park.

In 2004, the Botanical Gardens were restored to their 1836 layout and the remainder of the monument was removed to storage from which it has not yet emerged 10 years later. Conditions attached to the listed building consent for the removal of the memorial from the Botanical Gardens are believed to have required the restoration works to be completed, and a precise location for the memorial secured, within 2 years of the Listed Building Consent approval. Failing to find a new home for the memorial means that Sheffield Council is in breach of its own Listed Building Consent.

Sheffield’s Crimean war dead do not deserve to be forgotten and their monument left indefinitely in storage. That is why the Victorian Society is calling on the Council to come forward with a timescale for finding the monument a new home in time for Remembrance Day 2014.

Sheffield has featured in the Victorian Society’s Top Ten a number of times in recent years. Sheffield Council is currently exploring the possibility of selling Heeley Bank School, which was included in the 2013 Top Ten to buyers who would return the building to use as a school. This would be a happy ending for this rare example of pioneering school architect ER Robson’s work outside London. Another local school, Hammerton School, in Darnall was also included in our 2011 list.

Other buildings nominated for inclusion in this year’s Top Ten included the old Sheffield Courts or Town Hall, which has been left almost untouched for the past two decades since its closure, and the Salvation Army Citadel which has been empty since 1992.