Much of the Victorian interiors of the chancel of St Botolph’s Church in Longthorpe are to be retained following a protracted legal battle between the parish and The Victorian Society. 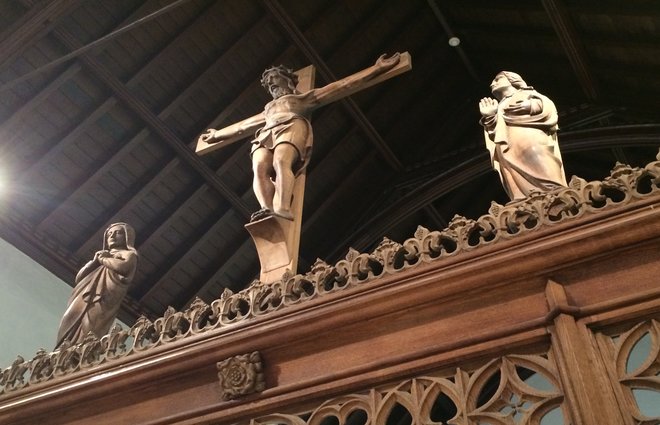 Plans submitted in 2011 proposed an extensive reordering of the Grade I-listed church, removing virtually all of the Victorian interiors including the nave pews, altar and tiled flooring. Although the church was built in the 13th century, it was restored in the 19th and many of the internal fixtures originate from that restoration.

Several heritage groups objected to the damaging proposals which would have caused substantial harm to the historical and architectural significance of the church. The objections were overuled by the Chancellor who approved the plans this year; however, following an appeal by the Victorian Society, a settlement has been reached whereby many of the chancel fittings of the church will now be retained.

Christopher Costelloe, Director of the Victorian Society, said: “We appealed against the Longthorpe decision partly because we felt that the proposed stripping out of the chancel had not been adequately justified, and partly because the Chancellor ignored serious heritage concerns raised by a number of statutory heritage consultees without giving any reasons why. If a Chancellor can do this, it raises the question of whether there is any point in us taking part in the system.”

The appeal argued that the Chancellor’s judgement was deficient in several areas, mainly in justifying why the proposed reordering would only have a limited impact on the significance of the church – when it was the professional opinion of several heritage groups including The Victorian Society, Historic England and the 20th Century Society that just the opposite were in fact true – and that the “substantial public benefit” attained by the reordering could not be achieved in other, less destructive ways.

Although the Dean of Arches ruled that the appeal submitted by the Victorian Society had a real prospect of success on the grounds mentioned above, it was ultimately determined that a procedural error had been made by the Diocese in the handling of the case so the Chancellor’s judgement was overturned.

Following the decision, the parish approached the Victorian Society with the revised plans and a settlement was reached. The revised proposals involve the retainment of many fixtures which would have been lost if the original proposals had been followed through, including the tiled flooring, the eagle lectern and altar rails.

James Hughes, Churches Conservation Adviser for the Victorian Society, said: “We maintained from the beginning of our objections that such radical proposals for the chancel were completely unnecessary and would cause great harm to the significance of the church. We are therefore pleased that many of the fittings will now be kept.”

We would like to thank our legal representation in this case: our barrister Mark Blackett-Ord from 5 Stone Buildings and our solicitor Susan Ring from Harrison Grant.