This is the most exceptional of the baths I have visted so far. Not because it has elaborate decoration, stained glass and very high quality finishes. It doesn't. 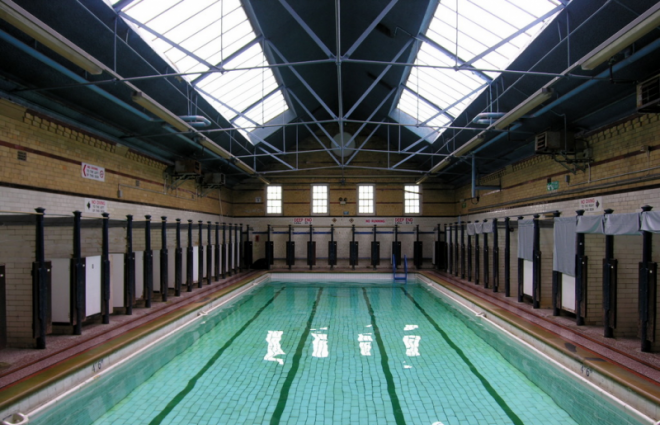 Its interest lies in its very survival. Baths like this must have been erected in their hundreds around 1900, all over the country, but there are virtually none left today in this intact state. Sure there have been some alterations here, but none which detract significantly from the experience of swimming in an 'ordinary' Edwardian baths -- nowadays an 'extraordinary' experience. The most noticeable change is the roof over the pool which has been reconfigured, no longer boasting a lantern.

It is perhaps easier to appreciate the 'showpiece' baths such as the Victoria Baths in Manchester, and Moseley Road in Birmingham. Both of these are listed Grade II*, but you can only swim in half of Moseley Road, and not at all in Victoria Baths, despite its victory in the BBC TV Restoration programme. The beauty and charm of their tiling and stained glass is obvious, but the historic importance of this simpler substantially intact baths should not be overlooked.

Money must be found to fix up this building, and for a very light touch restoration. It is a national treasure. The 'Olympic legacy' we should be aiming for is to get surviving historic pools back into top condition so that generations of ordinary swimmers can enjoy a dip in their local for a long time to come. Surely the department that overlooks both sport and heritage can manage this?

Manningham Baths were designed by Bradford City architect Frederick Edwards (1863-1945), and opened in 1904. English Heritage's list entry says: 'The building is a skilful compostion, with well detailed exterior stonework achieving a clean, uncluttered exterior which complements other public buildings in the immediate vicinity... The completeness of the interior is exceptional, including original changing cubicles, decor and reception area, and unusual detail such as ceramic spittoons along the sides of the pool.'

I can't help thinking that it should be upgraded to Grade II* due to the rarity of its survival.

(Why did I swim 105 laps? Well my original information was that the pools had been opened in 1903, but it turns out that they were begun that year, and opened in 1904. In fact at most pools I've swum 120 laps just to be on the safe side of any later historical disputes!)